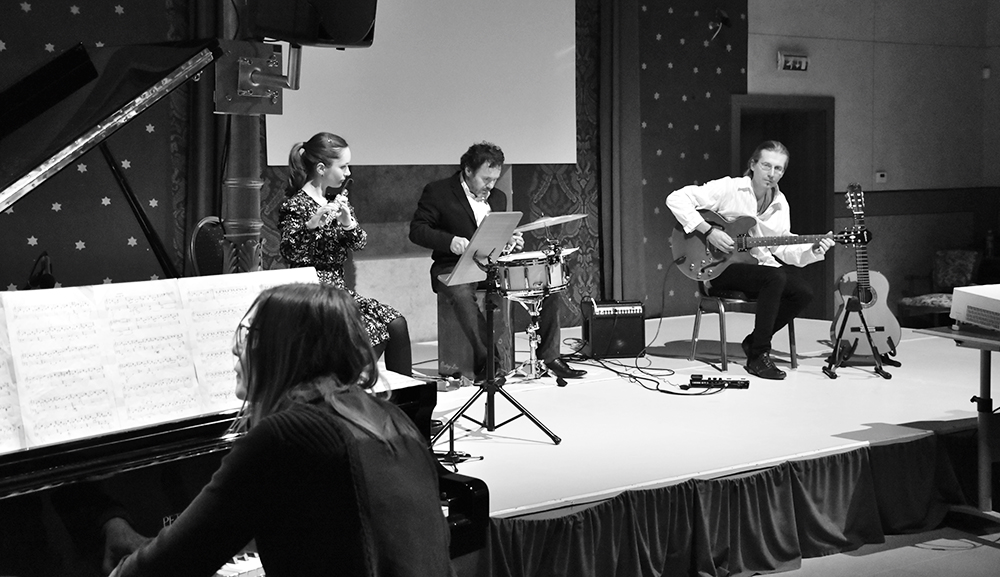 A vernissage of photographs by Yuri Dojc, a significant person of the world photography scene, was organised in Levice Synagogue of 4 March 2022. The exhibition is formed by amazing photographs shot by Yuri Dojc from then lively Jewish communities all around Slovakia. Visitors of the vernissage could see also a short movie by Kata Krausová who follows Dojc in Slovakia. The vernissage was accompanied by pleasant music by Let It Sound, a band from Levice. The exhibition of photographs by the Slovak-Canadian photographer YURI DOJC – LAST FOLIO in the Levice Synagogue was opened to the public to 30 March 2022.

Yuri Dojc about his exhibition:

In January 1997, I met an interesting woman, Mrs. Vajnorská, at the funeral of my father. She was one of about one thousand girls that boarded the very first train heading to Oświęcim in the beginning of 1942. She spent three years there and had lost the whole family, except her brother. She told me about her daily visits at people who survived like her. I asked you if I could accompany her at her regular rounds. She agreed. So I started to photograph these people and the world where they lived.

August 1968. Soviet tanks occupies Czechoslovakia and Yuri’s statute of a summer stay student in London changes to a refugee statute overnight. A year later he comes to Toronto where he has been living until now.

Other forty years later, Yuri Dojc is an important person of the world photography scene. His lifelong art and commercial work has been winning significant recognition. His works with a wide range – from portraits of Canadian war veterans to city panoramas – have been regularly exhibited and published. Dojc’s latest pictures from Rwanda were shown in the French daily Libération under the dramatic title “Country of Genocide”.

By sheer chance, Yuri with the documentary film crew got to an abandoned Jewish school in the Eastern Slovakia. Time stopped here on one day in 1942 when all the pupils were dragged to concentration camps. Books, exercise books with essays with mistakes corrected, school reports were still there, even some sugar remained in a cabinet…

From those disintegrating books lying on dusty shelves like the last witnesses of then prospering culture, Yuri Dojc perceived each as an individual who survived. And each book, shot like a portrait, keeps its last beauty. A picture telling thousands words.

Out of hundreds of fragments and books photographed by Yuri Dojc, the attention is attracted by the destiny of the one which found, like a miracle, its way from the dusty pile to its heir – to Yuri. It was actually once owned by his grandfather Jakub. And thus the way of memory that started by a father’s portrait closed the circle.

This extensive project Yuri Dojc has been working on for more than ten years, and the exhibition is only one part of it, was presented to the public for the first time in 2009 in the Slovak National Museum in Bratislava, then in Prague and Cambridge, UK. It had a big success everywhere. From 2011, it has been presented in USA and Canada. The opening was in New York, then the exhibition moved to Bloomington, Indiana and to Ottawa. Other places in the United States are scheduled, too. In Europe, the exhibition was seen in Belgium at the European Commission in Brussels and in the Pierre Bergé Foundation. After Košice, European Capital of Culture 2013, it will go to Rome and Moscow.

Many pictures from this exhibition are already in the collection of the Congress Library in Washington. 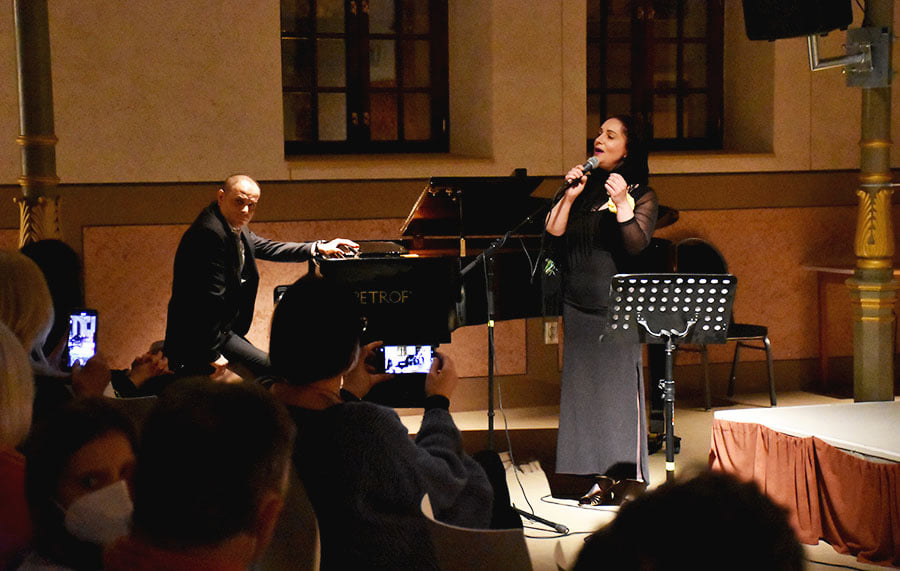 The concentration camp Auschwitz-Birkenau near Oświęcim, Poland, has become a permanent symbol of the holocaust and crimes of huge dimensions committed by Hitler’s Germany. The largest Nazi death factory was established in Spring 1940. Here and in the adjacent camp Auschwitz-Birkenau, Nazis killed approximately 1.1 million people between 1940 and 1945.

27 January 1945 was the day when Soviet soldiers, members of the 60th army of the 1st Ukrainian front entered the camp. It was Saturday, about 3 p.m. They were shortly followed by film crews and the whole world could see the unbelievable suffering and the truth about the death camp with own eyes.

Based on a suggestion of Israel, USA, Russia and Canada, the General Assembly of the United Nations established 27 January as International Holocaust Remembrance Day.

The City Cultural Centre remembered the historically significant and tragic events by a commemorative evening. The event took place in the premises in Levice Synagogue on Thursday 27 January 2022. The invitation was accepted by Mgr. Marta Švoliková who had a lecture named: Train to Eternity. Deportations from Levice. We had an opportunity to listen to stories of several Jewish families from Levice, our fellow citizens. Mr. Matúš Zelieska, chairman of the civic association Geniza, spoke about the cultural and intellectual life of Jews in our town: Last two decades – Levice Kehila in the inter-war and pre-war periods. The last lecturer, Mgr. Petr Mészároš had a lecture where he clarified the facts from the camp liberation: Liberation of Auschwitz. The atmosphere of the evening was enhanced by performances of artists from Levice, Peťko Daru, a young promising pianist, Elia Kačiová, a jazz singer, musician, educator, Ondrej Krajňák, one of the best Slovak pianists, jazz artists, and Veronika Mészárošová, a student of the Academy of Performing Arts, an excellent reciter.

We believe we honoured the memory of all victims of the holocaust: Jews, Romani, Sinti and other Roma ethnics, political prisoners, Red Army soldiers, people who sacrifices themselves for the persecuted, victims from sexual minorities, people with a physical or mental handicap, Christians of all denominations in a dignified manner. We believe that we can contribute to a higher tolerance among people and to prevent the raising xenophobia and racism also with such events. 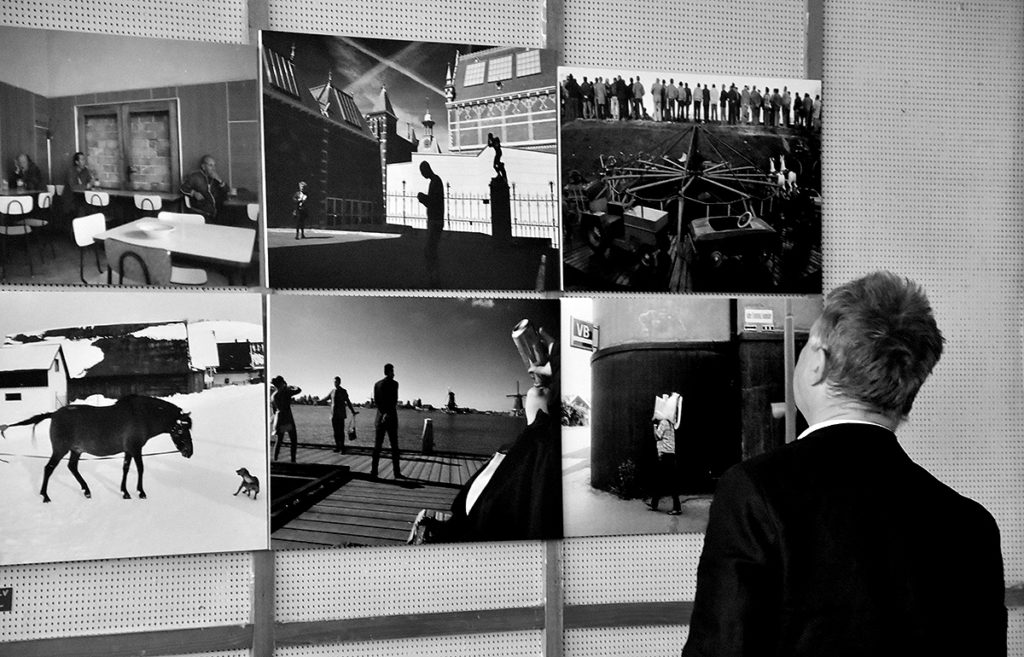 The reconstruction of the national cultural heritage of the Jewish School will mean establishment of a Tolerance Centre where we want to support the idea of mutual learning of culture, differences and traditions. Although the Jewish School is just before its reconstruction, its premises have come alive with art on 20 April 2022. Worn walls, cobwebs, dust, old windows.  Strangely harmonising with pictures. They evoked memories, nostalgia in some visitors, others found a metaphor with the events in Ukraine.

There are many young people who succumb to ideas of extremism and intolerance. They often cannot see the context with the past and the sad history of the 20th century. Many minorities in Slovakia still face certain forms of racism in the society. In relation to the war in Ukraine, Ukrainians fleeing from the war violence have become another minority along Hungarians and Romani in our town. They experience a similar destiny like Jews during the World War II who were victims of the genocide.

The vernissage NO TO WAR attracted many visitors. Pictures, photographs and works of art by local artists were installed on the first floor of the not yet reconstructed Jewish School. The voluntary contribution as well as the proceeds from the auction of the works will be used to support our Ukrainian fellow citizens. 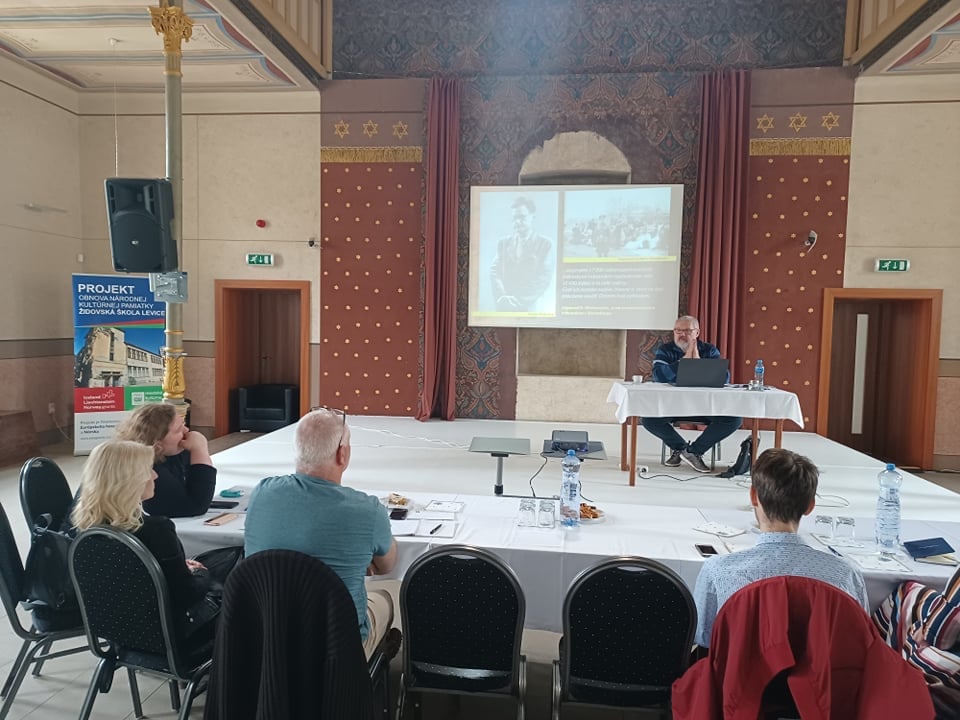 A series of expert seminars that were organised within the project of Reconstruction of the National Cultural Heritage – Jewish School on 6, 19 May and 7 June 2022 in Levice Synagogue were intended for primary and secondary school teachers from the district of Levice. The aim of the seminars organised especially for teachers teaching history, civic education, ethics was to present new opportunities in three series of seminars, and especially to direct the teachers methodically correctly, to create a space for exchange of experience, knowledge and support to eliminate demonstrations of extremism and prejudices in the school environment and among the youth.

The lecturers were: PhDr. Stanislav Mičev, PhD, Mgr. Lucia Sotáková, PhD., Mgr. Katarína Ristveyová, experts from the Museum of the Slovak National Uprising in Banská Bystrica, with whom we have started cooperation.

Topics of individual lectures: Terminology of Fascism and Nazism, Holocaust in the arbitration territory and in Levice, Education about the Holocaust – theoretical background and practice

Opinions and attitudes of young people is largely formed and influenced by the family, school, peers and media. The task of the school, family and the whole society is to show the danger represented by extremism to the young people. Children and youth should learn how to distinguish critics of political decisions from dangerous demonstrations of extremism based on suppressing human rights of certain groups, and trials to set up a new order the rules of which do not correspond to the principles of democracy.

We are very glad that teachers from 13 schools from our district were involved in the series of lectures and open discussions. Thus, also thanks to EEP and Norway Grants, we can help changing intolerance attitudes towards ethnic, religious or social minorities. 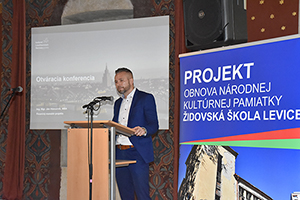 On 20 October 2021, a kick-off conference regarding the restoration of the national cultural heritage – the Jewish School Levice project took place in the synagogue premises.

Within the programme, participants of the conference were addressed by Mgr. Mária Mészárošová, Director of the City Cultural Centre of Levice, who gave welcome to the honoured guests, as well as by Mr. Terje Theodor Nervik, ambassador of the Kingdom of Norway in the Slovak Republic, and RNDr. Ján Krtík, mayor of the city of Levice. The project as such was introduced by Ing. Mgr. Ján Hámorník, MBA, Project Financial Manager, and Ing. Zsolt Papp, Project Manager. The history of the Jewish school in Levice was presented by Mgr. Marta Švoliková from the State Archive in Nitra, Archive Levice office. An interesting ending of the spoken part was the presentation of Matúš Zelieska, Chairman of the Geniza citizens association, regarding the social and cultural life of Jews in Levice. The cultural programme included a presentation of a student of the Elementary Art School of Pál Kadosa in Levice and Karin Sarkisjan presented beautiful Jewish songs.

The city received EUR 900,000 from the grant scheme of EEA. The aim of the project implementers is to build new educational and cultural premises as a creative centre of the city and of the region with a permanent exposition regarding the lives of Jewish citizens in the city and its surroundings.